Guest Post: What if the Gods Walk Among Us? – M. A. Church 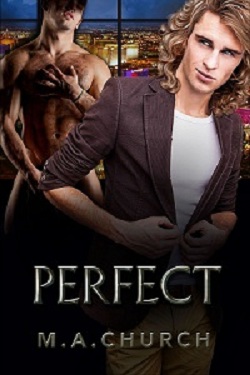 Perfect, by M. A. Church
Sequel to Priceless
The Gods: Book Two

Many names for one person, right?

Eros appears in Classical Greek art as a young-looking, slender-winged youth who is often depicted as being mischievous, but during the Hellenistic period he’s increasingly portrayed as a chubby boy. It was during this time he acquired the bow and arrow that remains a distinguishing attribute; a person, or even a deity, who’s shot by Cupid’s arrow is filled with uncontrollable desire. But he also has arrows that could fill someone with hate.

But… what if the gods do walk among us?

What if Cupid is more than what the mythology tells us? What if he isn’t married to Psyche, and insteads stumbles across a human male who is destined to be his mate while in Las Vegas at The Palms, shooting his arrows to meet his quota? Heavenly day, what if Cupid wants to take human form and age himself so he can attract the interest of this man?

What if we humans have no idea just how badly we’ve messed up the pantheon?

And finally, what if there’s a side to Cupid we’ve never heard about? The dark, obsessive side of love that’s caused more than one war throughout time; an alter ego known as Jealousy that even the god of all gods, Zeus, fears? Can the love of the human known as Jeff control Jealousy? Can he tame the beast?

Jeff backed Cam into the door and brushed his lips across Cam’s. Heat flared between them as Jeff lost himself in the feel of Cam’s soft lips and scratchy five o’clock shadow. He enjoyed the kiss, but something was missing. He raised a hand and rested it on Cam’s neck. His strong, quick pulse thudded under the silky skin.
Cam slid his hands around Jeff’s waist and suddenly turned them around. Surprised, Jeff broke the kiss. He opened his mouth to say something but Cam leaned into him, backed him up against the door, and attacked his mouth. Desire roared out of nowhere, knocking Jeff off stride as Cam took over again.
Jeff’s head spun with pleasure as Cam ground against him. Shock waves of pleasure raced through his body. Shaking from the intensity, he moaned as Cam led him down a whole new path; he was actually concerned he’d come in his pants… from a kiss. Breathing harshly, they broke apart.
“I need to go inside.” Cam ran his thumb over Jeff’s wet bottom lip.
“Let’s go.”
“I’m going inside; you’re going back to your friends.”
Confused, disappointed, and aroused to the point of pain, Jeff ran his hands through his hair.
“Are you…? Do you mean to tell…? Dammit, Cam.” Jeff rested his head against the door. “I’m dying here. You really aren’t going to invite me in?”
“‘Fraid not. I told you, I don’t fuck on the first date.”

About M.A. Church
M.A. Church lives in the southern United States and spent many years in the elementary education sector. She is married to her high school sweetheart and they have two children. Her hobbies are gardening, walking, attending flea markets, watching professional football, racing, and spending time with her family on the lake.
But her most beloved hobby is reading. From an early age, she can remember hunting for books at the library. Later nonhuman and science fiction genres captured her attention and drew her into the worlds the authors had created. But always at the back of her mind was the thought that one day, when the kids were older and she had more time, she would write a book.
By sheer chance she stumbled across a gay male romance story on the web and was hooked. A new world opened up and she fell in love. Thus the journey started. When not writing or researching, she enjoys reading the latest erotic and mainstream romance novels. If you’d like to see more of her, check out her blog, follow her on Twitter or stalk her on Facebook. You can also find her at Goodreads.