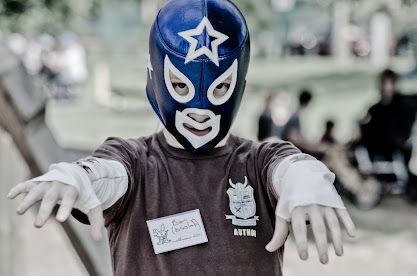 I am sore today.

Sore as in pysically sore. In specific, my thighs feel like they’ve had more of a workout than they’ve got since…well, since the last Kick Off BBQ actually. One of the reasons I love NaNoWriMo is the writing community it brings together each year, or perhaps the writing community it specifically brings together in Melbourne. According to the goodie bag totals left after yesterday (i.e. none), over fifty people showed up to our NaNo 2011 kick off BBQ, bringing more sugar, sausages and crazy writing enthusiasm than is safe for the human mind to safely cope with. There was frying of foodstuffs, the eating of brownies (warning, contains nuts), and the now obligatory playground games that are also an incredibly effective form of exercise for sedentary writers more at home in a computer chair than the local gym.

I mean one of the joys of getting older, is the joys of realising that acting one’s age isn’t really as much fun as not acting ones age, and playground games are just one of the things that I highly recommend you embrace during the crazy that is NaNo. Officially, it now appears that Melbourne NaNo has two of them. Zombie Tag and Blink. 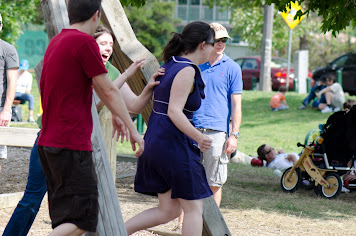 Zombie Tag
Zombie Tag was a random idea I spouted off about 4 years back, mostly as a joke, which turned out to be a surprisingly good game in a confined space with dead ends–like an adventure playground. The basic idea of Zombie tag is that you start with one person, patient zero, who has to zombie shuffle and groan ‘braaaaains’ as s/he goes after the others. And once a person is caught, they too become a Zombie, and shuffles…and goes after the humans. And the plague grows until there are no humans left…and the last surviving human gets to be next game’s patient zero. Other rules: no leaving the boundaries of the adventure playground. Do not interfere with kids on the playground. If they block your way–tough. 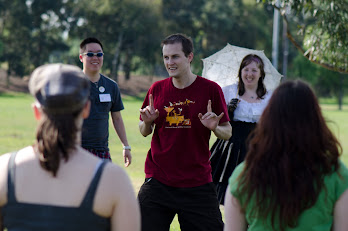 Blink at the Melbourne NaNo Kickoff BBQ 2011 - Photo by Quoll

A variant of the ‘What’s the Time Mister Wolf’ game genre, this particular version was dreamt up by Misty, our resident creator of plotbunnies, and inspired by Doctor Who. In blink the aim is to steal an item (in this case, one of our resident mascots, Walter Wombat), from the feet of one player, who stands in the middle of a circle of people. The trick? The people in the circle can only move when the player in the middle can’t see them. If s/he catches them moving, s/he can point them out and they have to return to the outside of the circle.  Once the item in the middle is nabbed by someone they have to run back out of the circle to a winning point (we used nearby trees) before the middle person catches them. If they make it–they get to be in the middle the second time around.

Of course, just like in the Doctor Who episode of the same name, the creepiest thing about being in the middle is turning around and seeing everyone has moved closer…without you seeing them.

There are reports of Zombie tag spreading to playgrounds around Victoria, and hopefully soon across the world…

Cherie Noel on Cuddle Time and Christmas Memories
Another Letter to Joy FM, re: Racism on Air
What? Non-Fiction? Really?