30 Days of Christmas with Lex Valentine

Today I’d like to introduce author Cherie Noel, here to share some Christmas cheer and some stories to stuff in your stocking…or for stuffing inspiration anyway. She has not one, but two Christmas stories out at the moment and I caught up with her to grill her about life, writing, and holiday silliness.

What do you love best about this time of year?

Huh. The twinkling lights. No, really. They make me think of every single magical moment in my life.

What inspired your new story?

*blinks* Which one? Christmas Rum Balls was inspired by Tony, Neil, and Kevin, the main characters, who were originally inspired by a picture chosen by a reader from the M/M romance group on Goodreads. Thanks Heather C. for giving me the boys…Or, I also have Cuddle Time Chicken Soup…and that was inspired by Robert and Christie of The Soldier and the State Trooper…hmm. My characters seem to love Christmas and food as much as I do.

Hmmm. I dunno. Funny? Not so much. Maybe the story of the time I burned the Thanksgiving turkey…well, it was more a case of broiling rather than baking. The poor bird looked golden and beautiful on the outside but was still bloody on the inside.

The best Christmas memory ever? Waking up early…my sisters and I had been sleeping in the living room, and woke to find a gingerbread tree under the tree. So magical.

Aside from your books—which everyone should buy—what do you think is a failsafe Christmas Gift?

The gift of self. In my family, we take little slips of paper and write out little gifts of service we can give to one another. Foot rubs. Cups of tea. Doing a chore. Stuff like that, just—little things…and then we roll the paper up, tie a ribbon around it, write the person’s name on the outside and hang it from the tree. How fun is that? 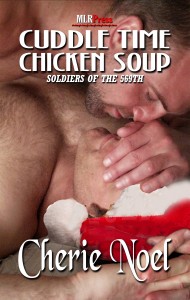 Lots and lots of Dancing Bull Merlot. That way if I burn the roast, I’m too toasted to care.

You write a lot about soldiers. What draws you to them as characters?

I come from a long line of military people. I myself served as a soldier during Operation Enduring Freedom. I…geez, I guess I really believe one should write what one knows. And I know soldiers. I love men in uniform, and I was damn proud to be a dragon soldier. That’s Chemical Operations to you civilians, lol.

“Evans, does anything I’ve ever told you about my Aunt Cate give you any reason—any reason whatsoever—to expect her to just call the damn recipe something normal? I call it Cheesy Chicken Soup. You can call it that most of the time too. But Cate—bless her crunchy granola, tie-dyed heart—is flying in tomorrow to spend the holidays with us. You’re gonna be at the house. You’d better know what she calls the damn soup, or she’s liable to explain her reasoning to you.”

Christie took in a slow breath.

Back when he’d lost his parents to a drunk driver at the tender age of fifteen, Cate had spent many, many moments shoving steaming mugs of her famous—infamous?—Cuddle Time Chicken Soup at him. In the foggy cold of a San Francisco summer she’d plied him with enough of the damn stuff to fill the bay. Every cup came with an extra-large helping of touchyfeely snuggling. Christie could recite the accompanying lecture verbatim. He could even—Christie rubbed his fingers together as a tactile memory of that time swept through him. The blanket she wrapped him in back then was still on the back of Cate’s couch. Mocha, tan, and creamy white; to this day Christie needed only to press his fingers together to feel the nubbly soft texture. Cate told him years later that she’d knitted that particular blanket
just after Christie was born in response to a dream she’d had of his parents deaths.

Christie’s throat grew thick, clogged with a thousand things left unsaid.
He blinked, hard.
The damned florescent lights in the recreation center stung his eyes.
Muscles between his shoulder blades tightened, right in the spot which had acted up ever since his most recent deployment. He rolled his shoulders forward. The good hurt of stretching muscles distracted Christie. The raw heat burning just behind his eyes eased for a moment. Christie sucked in a scrap more air and then blew the air out slowly. The urge to tell Evans to just fucking get the name of the soup right beat in his throat like a second heartbeat. Christie circled back to the same damn thought.

How hard could it be to remember to call Cate’s soup what she wanted the damn stuff called? Really? Because the woman would just be looking for an excuse. Christie shook himself. Okay, yeah. She was coming for Christmas.

The house at Harrah’s would take the odds she’d had a dream or some crazy premonition about the mailroom bombing the day after Christie had enlisted. Shit, most likely she’d booked her ticket for this trip then. She never missed a trick either. Her having a chat with Christie about how much he needed to spend some time snuggled up with Robert was a foregone conclusion anyone who’d spent more than two minutes around Cate would reach.

Christ on a cracker, he really couldn’t take hearing about how important touch was. He didn’t want to cuddle with anyone right now. He just—everything closed in too quickly these days. And anyway, he’d heard his aunt’s damn “cuddle speech” more times than he could count.

No. Just fucking no.

He concentrated on pulling in a few more slow breaths before continuing.
“Please, man. Call the stuff by the name Cate uses while she’s here. I can’t bear to hear the ‘Cuddle Time is Important Time’ speech again.”
Evans stood, his mouth slightly open, staring at Christie without blinking. Christie lifted his hand to press two fingers against his friend’s neck. Evans jerked back.
“What are you doing?”
Christie put a hand on his hip.
“Checking your pulse, Evans; what did you think I was doing?”
Evans held up a hand, the palm facing Christie.
“Shun, Collins, shun. Trooper Gigantic over there just got to the point where he doesn’t bare his teeth and growl when you and I are in the same freaking zip code. That man is not over our…um, my lapse of judgment when we were deployed. I kinda like hanging out with you outside of work again, and if your trooper sees you touching me all he’s gonna see is me trying to get in your pants. Christie. Don’t fuck up my bff time, man. You know how I get when I start jonesing for a hit of home, and right now? Dude, you’re the closest I got to home with my dads off on their damn ‘world tour’ for the past few months.”
Evans thrust one hip to the side, hands up to make quotation marks in the air before him.
Christie grinned.
Evans waving his hands in the air to talk equaled Evans needing to talk to his dads pronto. He only got this campy when he was missing them.
Christie turned his head to look across the room to where his husband Robert stood, deep in conversation with Christie’s former platoon sergeant.
Sergeant Tarans nodded, one of his characteristic grunts moving visibly up from his abdomen to lift his chest. From the corner of his eye Christie caught the motion of Evans turning to look as well. Robert looked up. A vertical line appeared above the bridge of the tall blond’s nose as he took in Christie’s proximity to Evans. His brows drew together. Impossibly blue eyes flicked a glacial look over Christie’s shoulder. Robert’s chest heaved once before his eyes drooped shut. Two more breaths lifted the wide expanse of his chest before his eyelids rose to unveil the same startling cerulean-color orbs locked on Christie, burning into him like the very heart of the hottest sort of fire.

Christie’s lungs stopped working, and his tongue flicked out to swipe once across his upper lip. Christ on a cracker, he could practically taste the salty goodness of Robert’s cock on his tongue when the man looked at him that way.

A tiny smile tipped the corners of Robert’s mouth up, and he gave a barely perceptible dip of his head. A wave of heat rushed upward from low in Christie’s gut until his cheeks and forehead blazed with warmth. Like a tsunami after a huge offshore earthquake, the heat Christie felt built and built to mammoth proportions.

Then the wave crested, blood crashing back down through Christie’s body. His cock flipped up faster than the top of a PEZ dispenser at a diabetic’s convention.

And of course, that’s about where we’re going to leave you. Check out the book to get the good stuff!

Want More Cherie Noel? Find her: On the web, On Goodreads and on Facebook. You can also find her on Twitter.